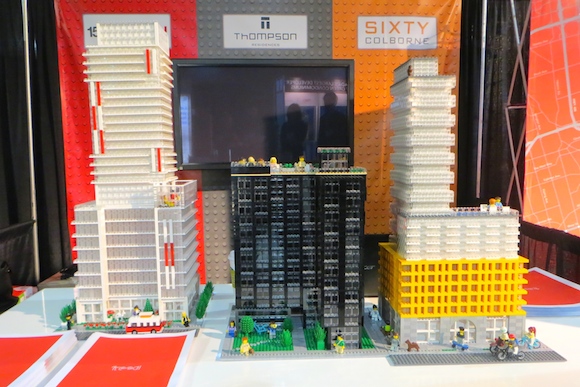 This May 7 & 8, Freed Developments took part as an exhibitor at this year’s Realtor Quest, Canada’s biggest realtor trade show and conference. Realtors attend this yearly conference to discuss trends in the real estate market, mix and mingle with other professionals and attend seminars on cutting edge industry topics.

This year the Freed booth featured a LEGO model of Sixty Colborne, in addition to two other projects built by LEGO artist, Graeme Dymond. Because renderings and models are an excellent way to showcase architecture, but LEGO bricks are much more fun. And while just about anyone can pop two LEGO bricks together, we were looking for someone with some serious talent for this project, which led us to Graeme, a former learning consultant from TD Bank Group turned Canada’s first LEGO Master Model Builder.

What does it take to become a LEGO Master Model Builder, and how does one move from a rather comfortable corporate position to every child’s dream job? After almost nine years of working in finance, Graeme took a chance and took part in a grueling audition process, where he beat out 200 other applicants for the role of Master Model Builder.

He now works for his own company, Graeme Dymond Custom Brick, where he continues to design and create for special exhibits. He also frequently works with children to show them the basics of building as well as some more advanced techniques that allow kids to open up their minds to different building possibilities.